"The Man Mo Temple Compound on Hollywood Road in Sheung Wan comprising three blocks – Man Mo Temple, Lit Shing Kung and Kung Sor – was built between 1847 and 1862 by wealthy Chinese merchants, primarily for the worship of Man Cheong (God of Literature) and Mo Tai (God of Martial Arts). Lit Shing Kung was built for the worship of all the Chinese gods, while Kung Sor served as a meeting place and a venue for dealing with matters related to the Chinese community in the neighbourhood. The three blocks are separated by two alleys.

Man Mo Temple was officially entrusted to Tung Wah Hospital with the enactment of the Man Mo Temple Ordinance in 1908. Even today, the Board of Directors of the Tung Wah Group of Hospitals and community celebrities still congregate at the temple every year for the Autumn Sacrificial Rites to pay homage to Man Cheong and Mo Tai and to pray for prosperity for Hong Kong. The temple is of paramount historical and social value to the territory, as it represents the traditional social organisation and religious practices of the Chinese community in old Hong Kong.

Man Mo Temple is a two-hall-three-bay structure fronted by two granite drum platforms. A pair of screen doors is placed in the front hall. In accordance with the traditional Chinese architectural layout, the rear hall housing the altars of the deities is a few steps higher than the front hall. The two halls are separated by a courtyard covered by a double-eaved hip-and-gable roof supported by four granite columns at the corner of the courtyard and flanked by two side chambers with humpbacked roofs. Lit Shing Kung, attached to Man Mo Temple on the left, originally comprised three halls and two courtyards, which were later covered by steel roofs. Kung Sor is now a simple one-hall structure; the historical granite doorframe on which the year of construction can be found is still well preserved .

The magnificent Man Mo Temple Compound is a fine example of traditional Chinese vernacular architecture and is exquisitely decorated with ceramic figurines, granite and wood carvings, plaster mouldings and murals, all of which exhibit superb traditional craftsmanship."
Source: http://www.amo.gov.hk/en/monuments_96.php 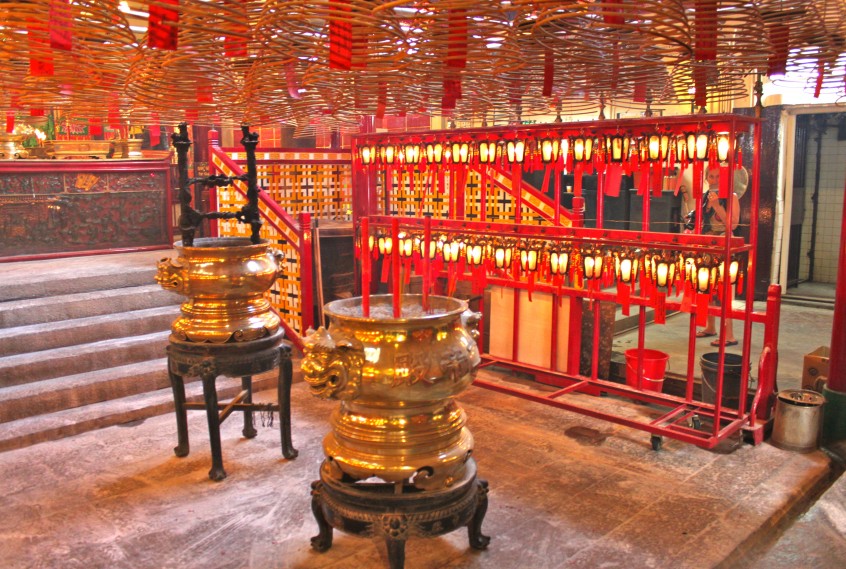